The options at Compaxo in terms of shape and size are endless. Partly depending on the customer's aims and the market segment in which they find themselves, we can offer our products in various portions, shapes, sizes, quantities, compositions and weights to match the customer's needs. 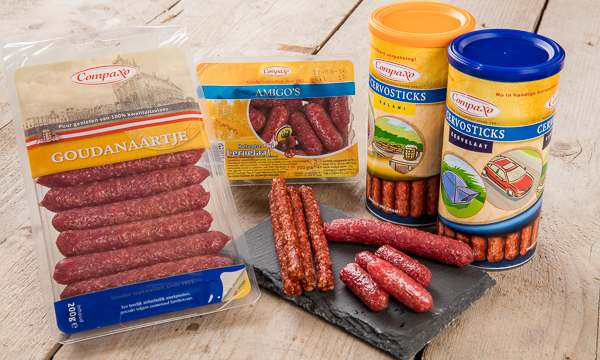 Halfway through the last century, people began breaking with the tradition of eating only at three strict times during the day. It became more popular to eat outdoors and people also began snacking more. Meat products have remained popular throughout the years, but increasingly people want to eat meat in smaller portions outside of traditional mealtimes. Particularly during parties, savory snacks were served. People also began living further away from their workplace, and traveled more. Dried sausages keep their shelf-life when they're unrefrigerated, meaning it was easy to pack them as a snack. With its dried sausage snacks, Compaxo was quick on the scene to respond to these demands. Compaxo started making snack-sized cervelat sausages, and in that sector has grown to become one of the largest players in the Netherlands. These snacks can be prepared to be disk-shaped, sliced, mini sausages or mini balls/dots.

Our diversity in terms of packaging possibilities offers the possibility to condition the small snack sizes in a practical way. In addition to cervelat snacks, Compaxo also began to make other snack-sized meat products, such as mini meatballs, smoked sausage slices, cabanossi, hot dogs and mini knockwurst. Ask us to find out more about the possibility of ordering our products in snack size.

Out of the Gouda town center Compaxo started in a small butchery with the first activities in processing and preparing meat and meat products. The knowledge of the family product is being passed down since five generations...